So, what do you do when bad weather rains on your parade and dreams of achieving your marathon goals?

You planned well and long in advance for what may be your once-in-a-lifetime adventure—completing a full marathon. Whether undertaken in an exotic foreign land or a homegrown event in your own neighborhood, crossing that marathon finish line is a legitimate achievement. Week after week, you logged your progress and overcame the intermittent stumbling blocks presented by a busy work schedule, family and social commitments and the occasional injury. A couple of times you seriously questioned your sanity in voluntarily subjecting yourself to the rigors of training. And then on the BIG DAY, there’s a storm! Heavy rains or snow or hail or heat wave—all can stop the 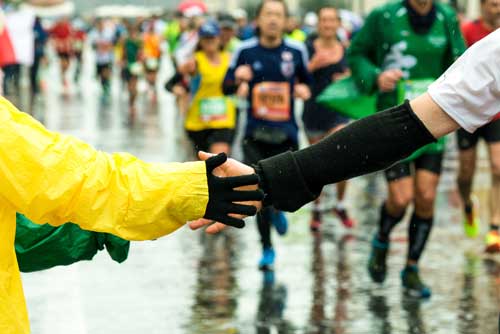 average mortal in her tracks no matter how well she’s prepared for her event.

While turbo-charged marathoners have been known to brave extreme weather conditions from the Sahara Desert to the freezing North Pole, organizers have at times had to make adjustments to starting times or event distances for the safety of participants. The starting time of Canada’s Scotiabank Half Marathon, for example, had to be changed at short notice to blunt the impact of an unseasonable heat wave.

Or, like the Rock ‘n’ Roll Montreal Marathon that was scheduled to take place just last month in September, organizers have had to actually cancel the race in the supreme interest of their participants’ safety.

Outside of life-threatening extreme weather or other conditions, however, it generally holds in the world of endurance running that when the going gets tough, tough adventurers just keep on going. Weather patterns have certainly changed over the years everywhere, and Accra is no exception. We’re experiencing more rains than we’re used to at this time of year, luckily, nothing yet that can be described as extreme. So, we hope for mild, perfect running and frolicking weather, and believe that in all likelihood, we can achieve our fitness goals regardless of whatever Mother Nature has in store for us on AIM day, 29 October. 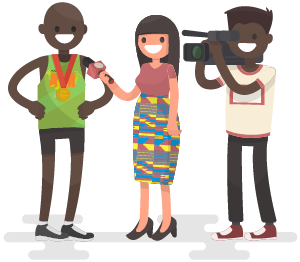 Organizers of the 11th annual Accra International Marathon (AIM) have increased the prize money for qualifying winners of the Full Marathon category of the upcoming AIM, scheduled to take place on 29 October.

The AIM management team announced in September that Betway, Ghana’s premiere online and mobile soccer betting platform, was supporting the competition with the Betway Prize for Outstanding Achievement (Betway Prize) for qualifying winners of the Half Marathon (21km) category. These winners will take home GHS3,000 each for male and for female categories, respectively.

Prize money for Full Marathon, a distance of 42 kilometers, had previously been pegged at GHS3,500 for each of the male and female qualifying winners. To bring the Full Marathon awards into line with the shorter distances, however, that top prize has now been increased to GHS5,000 each for the winning male and female.

As with the Half Marathon, cash prizes will be awarded to the qualifying second positions as well. However, owing to the limited numbers of elite athletes currently registered in the Full Marathon, Third Position prize money will only be awarded if there’s a significant increase in participation in this category.

We’re still seeking prize money sponsorships and will increase the prize purse if we secure funding so please check the Prize Money page regularly for updates.

Betway Ghana has raised the stakes.
Thanks to a generous sponsorship package from the online sports betting company, first place winners, male and female, of the Half Marathon category of AIM 2017 will take home cool cash to the tune of GHS3,000 each in prize money.

As previously announced, there will be prize money for first through third positions for the Half Marathon category, more if registrations and/or other sponsorships warrant.

The strong connections between sports, community and national development are generally well understood. In Ghana, and, indeed, much of Africa, however, athletes with enviable performance statistics do not have sufficient local opportunities to develop and hone their athletic skills in competition with their peers. Incentives such as the Betway Prize for Outstanding Achievement contribute greatly to such opportunities for promising local and other African athletes.

In addition to the excitement generated by their decision to sponsor the Betway Prize for Outstanding Achievement in the Half Marathon, Betway also promises engaging activations leading up to and on AIM day, 29 October, itself.

Be on the lookout for chances to win some complimentary tickets from the company that does everything for the love of the game.

Cool runnings—Jamaican patois. The phrase 'cool runnings' literally means, 'go in peace' or, 'safe journey'. It's a useful salutation at the end of a text message.

Distance makes the heart grow stronger, and the cool weather we’ve been enjoying in Accra for the last several weeks should help most runners go the distance. AIM Day is just over two months away, 29 October 2017.  You have a choice of several distances with the Accra International Marathon—AIM. From the short 5K distance that is popular with the youth and parents of young children to the 42.2 kilometer distance of the Full Marathon that endurance warriors love to conquer.

Just in case the mild weather isn’t motivation enough to get out and get moving, organizers of AIM2017 have just announced that they will revive prize money for those who bring the most creative fun on the course and at the Finish Line venue this year. This is in addition to the usual money awards for speed.

There will also be special awards for the under-15 categories. Stay tuned for news updates on prize money. In the meantime, whatever your chosen distance or time goal, cool runnings!

Our fundraising focus this year is on child or youth-centered charities, and we’re happy to shine the spotlight on Cape Coast School for the Deaf/Blind or Cape Deaf, as it’s locally known. The School AIMs to provide quality education for the visually and hearing impaired and to support them to realize their full potential as productive members of society.

One of our longest serving volunteers, Mamud Seidu, first brought Cape Deaf to our attention many years ago when he sponsored one of their students, Salim, who is deaf, to run in the 5k distance of the AIM. Salim did well, finishing in the top 10 of his age group right along with the non-hearing impaired. More importantly than his finishing time, though, was the great feeling of achievement that was clearly evident in his joyful smile as he crossed the Finish Line. 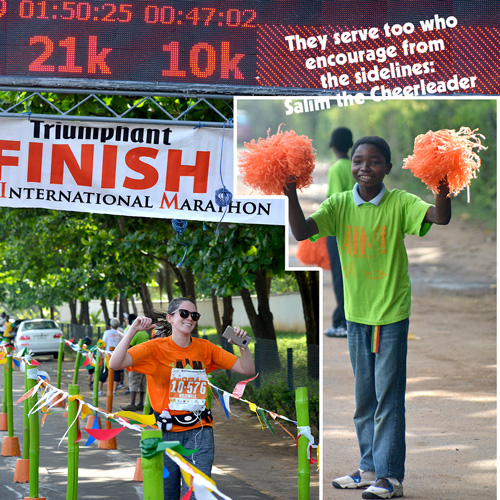 Salim has AIMed several times since then, progressing up to the 10K distance and always finishing in the top 10 of his age group. When he couldn’t run himself one year, he enthusiastically cheered others on from the sidelines. Salim’s achievements provide some evidence of the School’s motto, “Disability Not Inability.”

It’s a disgraceful fact of life in Ghana that there is still, in this day and age, a stigma attached to visually and hearing impaired children like Salim, so much so that some parents abandon such children, and the School becomes their only source of sustenance of any kind. Mamud, though not wealthy, has been generously supporting the school with provisions whenever he can do so. But the needs of the growing number of children at the School far outstrip what Mamud and a few kind individuals can provide. We are therefore happy to welcome the School on board as one of our Charity Partners this year. We’re very proud of Mamud and are ready to add more grease to his elbows as he AIMs his relay team, The Oguaa Champs, to raise funds for the School. Oguaa is the local and original name of Cape Coast.

We’re excited and encouraged by the fact that the School has developed well-planned strategies for becoming largely self-sustaining in the coming years. There’s the large marshy area that they have determined can be used for the production of fish to feed the students and earn some income as well. 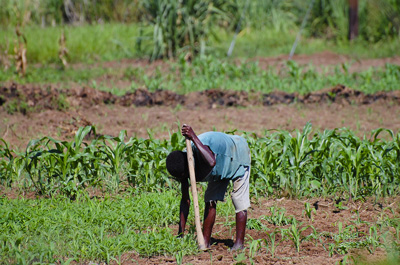 The School’s Agric Club has won the National Best Farmers Award, Basic School Category, twice in the past and needs funds to restore the farm that it lost from the 2015 flooding disaster. Cape Deaf has put together a sound proposal for poultry production that should yield steady income for the upkeep of their wards and satisfaction for the kind-hearted people and caring companies we’re seeking to champion their cause.

The carpentry department trains students in furniture production, products that can be sold to generate operating funds. But some of the equipment, donated over 15 years ago for this purpose, need replacement while others are overdue for serious repair.

Last but not least, Cape Deaf boasts of a cultural troupe that for festive occasions puts on lively dance and music productions to delight audiences. As they put it, “The blind drum for the deaf to dance.” Christian Morgan, second prizewinner of TV3’s Talented Kids competition this year, is a blind student of the School. We’re looking forward to showcasing several of Cape Deaf’s talented student performers at the AIM Finish Line venue this year, and we hope you’ll be on hand to give them a hand of applause.

In the meantime, you can champion our vulnerable children by:


And last but by no means insignificant, they serve too who encourage from the sidelines, so come out on AIM Day, 29 October, to cheer on your favorite champions.

We are seeking Title, Presenting, and other Sponsors for AIM 2022